A traditional Japanese martial system from feudal Japan.  This system is a complete martial system, however, only Iaijutsu and kenjutsu are taught outside of Japan. If you want to learn a traditional martial art that develops your mind and character, this art is for you.

The philosophy of Tenshinshou-Jigenryu-Hyouhou is to have pride in the five virtues; Humanity, Justice, propriety, wisdom and faith, and to cultivate the spirit of simplicity and fortitude, and to foster a kind of spirit that can contribute to society.


Tenshinshou-Jigenryu-Hyouhou was initiated about a thousand years ago. It can be said that it is one of the oldest martial arts in Japan. It is a synthesized martial art, composed of arts such as the art of Japanese sword, Iai, Jujitsu, the art of the spear and the art of Nagamaki. The training begins with the study of techniques, but the spiritual development as a human-being is the greatest goal. Tenshinshou-Jigenryu-Hyouhou enhances the spiritual growth as a human-being by studying the martial arts comprehensively, beginning with the study of the philosophy of the art of Japanese sword, and Jujitsu; which has an element of self defense.


In the latter part of the long history of Tenshinshou-Jigenryu of about 500 years, the art was passed on only to one disciple in each generation. The reason for this is greatly tied in with the change in society.  During that time, Kaiso Setoguchi-Bizennokami-Masamoto, the founder who created the name and art of Tenshinshou-Jigenryu requested land to settle in to the Kyusyu Satsuma, the only place who could match the power of Toyotomi Hideyoshi; the man who gained great authority by controlling Japan at the time.


It is written in history that because Tenshinshou-Jigenryu is the heir of Kamakuraryuuhyouhou, which is the succession of Minamoto-Yoshiie, Setoguchi-Bizennokami-Masamoto followed that connection and entered into Satsuma area of Japan.


The art of Tenshinshou-Jigenryu was very complete, even among the martial arts of that time, so in Satsuma, Tenshinshou-Jigenryu hid all its arts and theories of tactics as a secret weapon. It can be speculated that Tenshinshou-Jigenryu’s skill to subvert the enemy with just one blow, immediately after drawing the sword, which goes against the theory that one fights after the sword is drawn, must have been miraculous. The speed of 0.5 seconds to make the blow seems beyond human, and still overwhelms the people today. 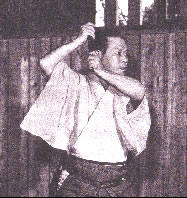 The 27th grandmaster, Genshin UenoMaster Genshin Ueno, The 27th soke of the generation left Kyusyu Satsuma for the first time in 500 years in 1946, and opened Tenshinshou-Jigenryu to the world. He trained many students until he passed away in 1972. Master Doushin Ueno, the 29th soke and Master Kagenori Ueno, the chief instructor, who are lineal heirs of Tenshinshou-Jigenryu, have held the sword since they were 3 years old, and are still continuing their training.

We are one of 6 Approved locations to learn this fast and dynamic art in North America. Please call, email, or stop by for more information.